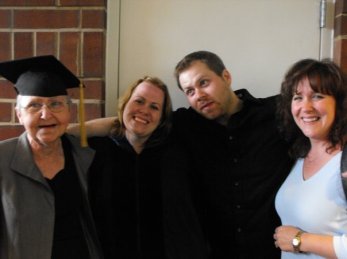 Thinking about girls who rule the world made me think of my grandmother. My grandmother passed last November and it’s taken me four months to come to terms with the fact that her funeral was really fucking weird.  She died in Texas, where my family had relocated, but was flown home to the town I was born in for her funeral and burial. Her funeral was held in the church I was baptized in, where my mother’s funeral was held, but it all felt very foreign. We had all moved on from this place.  A few days before my aunts asked me to prepared a eulogy, as I had for my mother, grandfather, and uncle. We joked that I had become the family eulogizer.  Before my grandmother died, she and I shared memories of her family. She told me, “You’re going to have to be the matriarch.” I thought she was just having a lapse in her lucidity as the dementia set in deeper. Maybe she was, but it was the last personal thing she would say to me before she died. She may have thought I was my mother. She called me “Patty” a lot in her last years. I’ve never been able to escape the shadow of my mother.

My mother had been the oldest and, when the funeral home director called my aunts and uncle to drape the cloth over my grandmother’s coffin, my oldest aunt beckoned for me. She said to her brother and sister, “She stands in Patty’s (my mother’s) place.” I helped drape the cloth and held my uncle’s arm.  My middle brother was supposed to be there, but at that moment he was being mugged at the train station. I’d continue to look for him during the service.

Then the service started. The men from the funeral home gave us directions and Little I asked me, “Do we belong to a crime family?”

Maybe? We certainly belong to a family with roots and history in this neighborhood. My grandfather had been an alderman and my grandparents were entrenched in the community.

And then the mass was over. The priest gave the homily and the Eucharist and then dismissed us all. No one said any personal words for my grandmother. My aunts and uncle looked at me, but I didn’t know what to say. These were different ivory towers than the ones I occupy, but they were ivory towers that were robbing my family of its closure. A family that had just lost its cornerstone. I clutched my book, left the church, and went to the burial site where we stood in the rain and walked through the mud.

I’ve kept the book, tucked away, still in shock from the weirdness of that day until TD tried to explain to me what it means to run the world.

These are the words I wrote for my grandmother, who really truly ran the world.

I had the honor of being with my grandmother at the end of her life. In between reading chapters of a biography of Liz Taylor and Richard Burton, I wondered about her name and where it comes from. “Marcia” is Latin and means “Dedicated to Mars; warlike.” One of my aunt’s favorite philosophers Bob Marley said, “You never know how strong you are until strong is your only choice. In that sense, there was never a stronger warrior than my grandmother. She raised five children, who eventually gave her 20+ grandchildren, who she always had endless love and energy for. She was married to my grandfather, which was a profile in courage itself. I envy and aspire to a marriage with as much love as they shared, but she showed her true warrior colors caring for him after he became ill. And, she did it with the love and humor that only she had, arranging his daily pills on a dessert plate despite his disdain for them. She dealt with the death of my mother and my uncle with grace, and I am grateful to her for giving me her memories of them, even though I knew it hurt her sometimes to talk about it. I can’t imagine burying my own babies.

I have so many beautiful memories from my childhood. Family reunions, drinking tea at the L-shaped dining room table, watching Murder She Wrote at the house on Wycombe Ave. But, I’m most grateful for the time I had with her once I became a mother. I may have sometimes gotten frustrated when she (or my aunts) would sneak frosting into my babies’ mouths, but she had taught me so much by example that motherhood wasn’t nearly so overwhelming. I am grateful for out weekly phonecalls we shared when she was still able. She gave me generations of wisdom, wrapped in a lifetime of laughter.

After her passing, I shared the news with others in my life. My parents’ contemporaries called her “Mrs. Meara”, but all of my friends referred to her as “Grandmom.” That had never struck me before. I had never noticed. Maybe because she had so many grandchildren, she forgot whose Grandmom she actually was sometimes, but I don’t think so. I think it gave her joy and happiness to have love around her and to be at the center of that universe. Everyone who commented or offered condolences said the same thing:

Grandmom was always so kind to me.

My warrior grandmother waged a relentless campaign of love, family, and courage. She has been and always will be a beacon in my life. My here. It has been the sincerest honor of my life to be able to remember her in this way and I feel blessed to know that she lives in the families we’ve all built because of her.