I saw my post on writing a scientific paper being passed around on social media this morning. Folks in the lab and collaborating labs are doing a lot of writing these days and it’s made me think about how I might expand upon, or improve upon, the paper writing process I previously described. 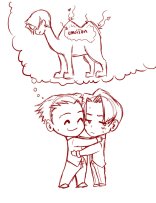 Recently I’ve been talking to folks about the risk of being an academic camel. I had heard the phrase “emotional camel” used somewhere on some reality show and it made me chuckle. An emotional camel is someone who has sporadic emotional interactions, so they have to store everything up like a camel storing fuel in its hump. Then, after sucking the emotional life out of something, the emotional camel can go for long stretches of time without additional reinforcement.

It’s not a perfect analogy, but the academic camel stores knowledge generally related to its research area in its hump. When the time comes to need some knowledge for a grant or a presentation or a paper, it indiscriminately brings forth everything that it’s stored in it’s hump in a giant, loosely organized ta-da!

The motivation is often the wow the observer/reader/reviewer with the sheer amount that you know about a topic, afraid that if you don’t unload everything you’ll have missed something important. The output of the academic camel (which I was, once upon a time) is difficult to parse through. It leaves the recipient feeling as though the camel knows a lot of stuff, but unsure as to why you need to know it too. If you’re not sure why you need to know it, is it even really important? As the camel, that’s a difficult position to put your audience in, wondering if what you’re telling them is important.

So, clarity and context are really important. How do you get there in your writing? I’ve been recommending that folks use a trick we all learned in the 6th grade and I re-learned after a brief interlude as an academic camel – outlining. I have yet to meet a more junior scientist that outlines.

It seems silly, but most of my papers have a very similar style. Rather than writing in the stream of consciousness, I start by creating sentences or questions that, when arranged in order, make my points. Almost like the process of writing topic sentences for paragraphs. Say, for example, I am writing an introduction to a paper about the impact of yo-yo shape on recoil speed, I might create the following sequences of questions:

Whether you choose to leave the questions in place as section headers is a stylistic choice. I often do, especially in the discussion of a paper. The person I trained with as a postdoc wrote with that style and I always liked it. Sort of like asking questions you know the answer to and then leading the reader to share it.

Either way, before starting a presentation or publication, the most important thing is to outline it out. Otherwise, it is very easy to realize you’ve talked around in circles or, worse, become the academic camel, dumping all of the information you know without purpose.