Sunday morning, Strange and I were sitting on the couch goofing off. I was catching up with Twitter and scrolling through the feed of one of my favorite accounts – 70’s Dinner Party (@70s_Party). When I was a little girl, my mother had a 1970’s Betty Crocker cookbook that has since been lost to the ages. I would lay on the living room floor and leaf through it for hours. This account just makes me nostalgic.

Swiping past all of the 70’s-era delights on my iPhone, I made a comment to Strange that they all seemed pretty low carb. I showed him the picture of  chilled celery log. Could it be that the 70’s were such a magical time because they were all in a blissful state of ketosis? Strange glanced, grimaced and shuddered. That felt like a challenge and I told him that I thought I could recreate all of the magical recipes from the deck that the chilled celery log came from and that he wouldn’t even hate them.

Turns out, they’re fairly easily accessible online (here and here). Problem is, the actual recipes aren’t available, thereby adding a new and more interesting dimension to the challenge. Could I re-create the recipe in spirit, while also making them palatable and also keep them in line with our low carb lifestyle? A challenge was really coming together…

Strange and I agreed to a couple of ground rules..

And so, the challenge began..

The first recipe selected by the random number generator was “Jellied

Tomato Refresher.” I have to admit, I was not emotionally ready to have that be the first one. I was hoping for an easy one containing hot dogs or slaw. I was not ready to have to begin with gelatin work.

I stared at that picture for a long time, wonder what I do to make that somehow palatable. It looks a little like road kill sans the skin and fur. What could be added to tomato to make it refreshing? There’s only one answer.

Vodka. A lot of vodka. I went to the market.

Browsing the aisles of our brand new Trader Joes, I thought that perhaps this recipe could be survivable if I went with Bloody Mary as an inspiration. I assembled my ingredients, pictured mostly below until the whole enterprise came off the rails.

Shown to the lef

t are the general ingredients.

I started by pureeing up the tomatoes to make a thick liquid, as opposed to whole tomatoes. This yielded just a bit shy of three cups. To that, I added on cup of vodka. I microwaved about a half cup of water to dissolve the gelatin and tore open one of the envelopes.

That’s when it occurred to me that I probably should figure out how much gelatin I’d need. I had ripped off the first line of the instructions, but could still read part of the word “gelatin” followed by 1 cup hot water and 2 cups fruit juice. I figured I was in business. I added a packet of gelatin, mixed it all together and popped it in the fridge.

That’s when everything went awry.

I spent the next few hours helping Little I clean his toxic dump of a bedroom. I came upstairs to check on my hellish creation and it was the consistency of thick tomato sauce with an awkwardly gummy bottom. I checked the remaining envelope of gelatin and realized that the recipe did not call for one envelope of gelatin to four cups liquid. It called for three envelopes. At about the moment, my eyes started to itch, and my throat started feeling tight. Whatever I had gotten into in Little I’s room had made my mast cells very, very angry. I called to Strange, “I need 50 mg of Benadryl right now before I die and another box of gelatin.”

When I woke up several hours later, chaos had ensued. Some attempts had been made to rescue my creation that resulted in a weird, uneven concoction with some portions having the consistency of rotting flesh. I dumped it down the drain and vowed to start anew anon.

Today I woke up, went to the pantry and pulled out a can of diced tomatoes. You can’t go wrong with died tomatoes. They’re a classic. I emptied them into a measuring cup. The can yielded about 2 cups of tomato stuff. I added another cup of Uncle Tito’s finest moonshine.

I was not going to go wrong with the gelatin this time, so I put a cup of water on the stove, heated and slowly added three packets of gelatin. It turns out, there is a science to dissolving gelatin that I did not know at the time, but will file away for future recipes. I boiled the gelatin.. I boiled the shit out of it and I would not recommend this because boiling gelatin smells like the most wretched of wet dogs. I put my mixture in the fridge, read about how you shouldn’t boil gelatin, and then sat around and stressed that my mixture wouldn’t set because I had boiled it.

Well, the punch line is that we’re here because my new tomato beast set!!! Science be damned and gelatin be boiled!!

The last step was presentation and luckily TD was around to help. We cut the gelatin into small cubes and dished them into a martini glass for effect. We added a couple of big Argentinean shrimp (whatever those are), some olives and homemade pickles.  The whole mold probably serves seven or eight. Total carbs for the endeavor is about 2.

So, allow us to present Jellied Tomato Refresher, presented in their 70’s filter glory.. 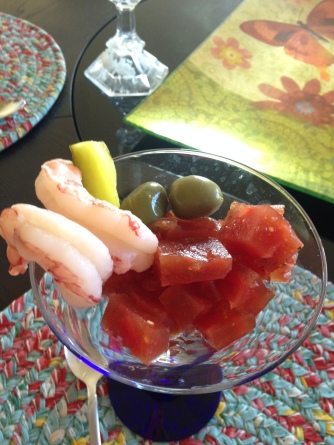 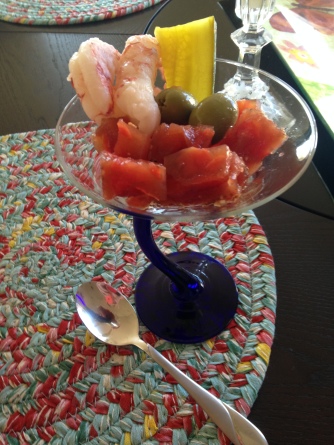 Turns out, jellied tomatoes and vodka with Bloody Mary spices is pretty delicious. We added a little extra salt and Worcestershire sauce, but olives, pickles and shrimp can make just about anything delicious. Strange took his first bite and proclaimed, “Man, now I just wish I had a Parliament.” The only place went off the path to success is in not stopping at one. One is, indeed, refreshing. We had a pretty happy buzz and were gleefully chomping shrimp like Mary Richards and whatever dude she was dating at the time. The second had us feeling a little ill and hyper aware of the fact that we were eating gelatinous tomatoes. My advice is to stop at one.

Until next time, 70’s party on dudes!