Subtext from this photo of just a poorly timed snap? (Slate)

These past 30 days have been a real trial of American patriotism and a real litmus test for doing what’s right. Yesterday’s DACA announcement by Jeff Sessions caused my university and our local school system to make statements that they value students, and that they will not penalize their students for their immigration status. I could see that some of these entities were clearly making some moves today to figure out how to deal with the possible end of DACA. Protecting children shouldn’t be a debate. It should be the core value of a society. Children don’t have the capacity to dictate their own futures and we shouldn’t punish them for the actions of their parents.

All of this on the heels of the violence in Charlottesville where white supremacists protested the removal of confederate statues. Advocates for the preservation of history ignore the fraught history of these monuments. The majority were erected as intimidation tactics around the Jim Crow and school integration eras. They’re not monuments to history. They are a sign to brown people, placed in front of courthouses and education buildings (which are sources of power to members of a society),  to remember their place in society. It’s not history. It’s terrorism.

So many of us looked to our president to clearly and loudly denounce the white supremacists, Nazis, and Klan members who stood in defense of these symbols and, when he didn’t, it wounded our country.  It reinforced the divides that keep underrepresented citizens at a disadvantage. Denouncing Nazis doesn’t seem like it should be hard, but our president said there were some “good people” among the crowd. Good people among a crowd of white supremacists! If there’s anyone you should be able to unequivocally call evil, it’s the Nazis. That should be easy.

Just when I thought we were at our peek ridiculousness with what should be a simple rejection of hate politics, the science publication Nature said, “Hey Trump… 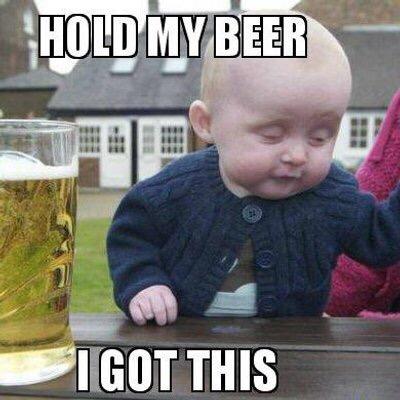 In their September editorial “Removing statues of historical figures risks whitewashing history”, the editorial staff writes in defense of the statue of J. Marion Sims:

The word ‘racist’ was spray-painted alongside his list of achievements, which include life-saving techniques he developed to help women recover from traumatic births. Yet many protest about the lionization of this ‘father of modern gynaecology’ because he performed his experiments on female slaves.

And as to how to deal with these problematic statues…

Instead of removing painful reminders, perhaps these should be supplemented. Such notes are also standard in biomedical literature. The American Medical Association recommends that if unethically acquired data are essential to science, any use or citation of these data should describe the unethical behaviour and pay respect to the victims of the experimentation.

Institutions and cities could do something similar by installing a plaque noting the controversy, or an equally sized monument commemorating the victims. Such a historical marker stands for Carrie Buck, a young woman who was the first person to be sterilized under a 1924 eugenics programme in the United States, which was designed to eliminate ‘genetically inferior’ people with mental and physical disabilities. It stands in Charlottesville just a few blocks — but a million miles away — from the disputed statue of General Lee.

For the record, I had to engage in some serious Google-Fu to find the memorial to Carrie Buck. It’s not a statue. It’s a roadside marker that you could drive by and never notice. This is what they equivocate to the grandiose statues of Robert Lee: 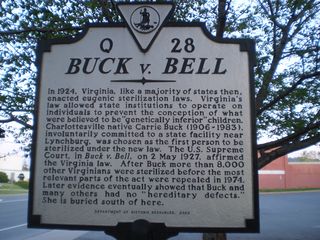 Problem is, like DACA and Nazis, this shouldn’t be hard. The two scientists the Nature editors hold as their examples of the possible whitewashing of history are J. Marion Sims and Thomas Parran, the Unites States surgeon general who oversaw the Tuskegee Experiment and the infection of Guatemalans with syphilis without their consent. These men advanced science by treating others as non-human. We don’t celebrate Josef Mengele for finding out how long it took people to freeze or describing the physiological effects of hypoxia. That would be absurd! So, why are we concerned with condemning the actions of scientists who experimented on other peoples considered non-human?

Statues and namings are not ways to remember our history. They are ways to remember our heroes, and people who hurt other groups of people are not heroes. We can remember their contributions in museums and history books. Refusing to commemorate their hurt in stone does not erase history.  It communicates that we understand the pain they inflicted.

So, why are people so concerned with the whitewashing of history? Because at their cores, many of us are afraid of falling on the wrong side of history. We worry that, like Parron and Sims, our ambition will drive us to make discoveries at the expense of robbing others of their humanity. We’re worried that in a hundred years, our statue will be the one with “racist” scrawled across it.

Maybe the greatest protection of that is a willingness to listen to why others were hurt by a historical figure. A commitment to not force others to accept the celebration of a problematic figure for his “scientific genius”. How many of us were given pause when we learned the origin of the HeLa cell? Data lives independently from its generator.