I racked my brain all weekend trying to remember the name of the movie where Morgan Freeman and that other guy (Jack Nicholson) make a bucket list of all the things they want to do before they die. Much to my chagrin, the google machine told me that it’s called “The Bucket List.”

I’ve always hated the idea of a bucket list. A list of things you have to do before your life ends. I’ve had a list of feats I’ve wanted to achieve or goals, but never anything that carried such weight or required reflecting on the end of my life with such finality. The things on my list have been more like challenges

. Things I wanted to show myself that I’m tough enough to make it through. I’ve always been proud of survival and toughness. I’m not the best or the fastest, but I’ll finish. In the words of some stuff from my Facebook timeline, I won’t quit but I will cuss the whole time. 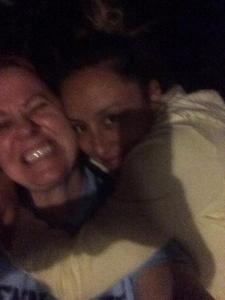 challenge was a 5K after Little I was born. I was 27 years old and had never been a runner.  The town we had moved to was full of fit and active people who ran in the evenings and on weekends and I was working with a bunch of athletes. The raced on weekends. I wanted to be able to say that I could finish a race. Around the time I started the last version of this blog, I started training for my first race. I trained so hard and finished the 5K. Then I ran a half marathon with Little I’s preschool teacher. And another. And another. When it seemed I had conquered the half marathon distance, I trained and ran a marathon. I don’t feel like I need to really *conquer* the marathon. Running it once was enough to say that I did it.

Around the time I was training for the marathon, I also bought a bike. The man I worked for rode his bike to work every day and I was looking for ways to get more activity into my day. I also didn’t like the realization that I couldn’t ride a bike. I got it into my head that if he could ride 8 miles to work each day, I could too. I went to a bike shop and bought a bike. I rode it around the block for a few days and then plotted out a route to work.

The first time I rode the 8 miles to work, it took me two hours. I arrived sweaty, sore, and so exhausted I could barely stand. I crawled into my office and my coworker asked me why I was so tired. I cried, “I thought I was in great shape, but I don’t think I can ride bikes. I can’t even make it up the hills!” She seemed confused too. The hills between my neighborhood and work were modest, at best, and I was in the thick of marathon training. I was in great shape. After a little patient probing from her, we soon discovered that I had been doing it all wrong. My only experience with cycling had been spin class where the instructor would say “We’re going uphill. Add a gear.” So, every time I approached a hill, I went up on my gears. I’m just glad we figured it out after my first ride. I don”t know that I’ve mastered gears, but at least I now move them in the right direction.

Once I had gained confidence in the ride to work, I needed to feel challenged again. I switched to padded shorts and bought bike shoes, cleats and pedals. The first time I used them, I tried to get on the bike while it wasn’t moving, broke the kickstand, and hit my head on the lawnmower in my garage.  Then I rode to the end of the street, rode into the stop sign when I couldn’t get my feet out, and fell over into some bushes. 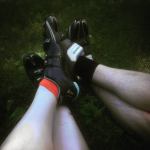 ventually, I got the hang of the pedals and needed a new challenge. I had always wanted to do a century ride. After a hiatus while I moved to our new town, Strange and I got back to biking. The next logical challenge seemed like a century ride. Problem was, I was terribly out of shape, had gotten chubby in the post divorce period, and could barely finish the 8 miles I had been riding easily before the move. The year went by and I vowed to try again the following spring. This brings us to the present, where somehow Strange and I have modified our plan from a century ride to riding across the entire state.

We’ve trained the entire summer, harder than I’ve trained for anything before. We’ve lost about 60 pounds between us and have ridden 600 miles since May. Spending that much time on my bike, I’ve learned so much about him, our relationship, and how far I can push myself. Traveling as many miles as we did, I have learned so much about the places and people of my state and it’s captured my heart. I feel more connected to the community around me. Cyclists smile and wave as they pass each other on trails and roads and local businesses welcome our sweaty forms. I’m nervous about spending an entire week on my bike, but I feel like we took the preparation seriously. We’ll see next Sunday how prepared we really are.  Most of all, I’m looking forward to exploring my state and meeting more of the people whose university I serve.

That said, I recently find myself reflecting on challenges with the next half of my life  and my own mortality in mind. The president’s budget proposal, with a 20% cut to the NIH, really hit me hard. I’ve always looked at my career in a service-oriented way.  It’s the part that makes it enjoyable and sparks my creativity. I want to do work that improves the life of patients (more on that later), but this budget communicated, “We don’t really value that.” Or at least, a faction of the public doesn’t want to pay for it and the inflexibility of academia makes it difficult to do things any other way. It’s like being stuck between a rock that’s telling you that the path to success is paved in NIH dollars, and a hard place that’s telling you they don’t value the NIH enough to keep it funded. It’s left me wondering why we’re working so hard, cannibalizing each other in grant and and tenure and paper review, to serve a public that doesn’t want to be served in this way.  That doesn’t trust those darned elite scientists and professors. Will I look back at the end of my life and wonder why I spent it clinging to Rome while it burned?

Also, readers of this and the previous blog may remember posts about my mother and her early death. She died a few months before her 40th birthday and I have spent most of my adult life rationalizing that her death was not a fluke. It was the result of smoking, and drug abuse and poor nutrition. I am healthy and fit and, although I am about to be 38, I not doomed to her fate.  But, recent events in our family circle have shook that reality and reminded me that, even if I try to do everything right, illness can still strike young people. It’s put an urgency in my thinking that wasn’t there before. With 5Ks, half marathons, marathons and bike rides, am I really living a full life? Are these the challenges I should be taking on? Am I serving people in a way that they really want to be served and in a way that adds to their lives?

One more prattle before I wind this down for the night. I’ve been doing a lot of business, finance and leadership reading lately. Robert Kiyosaki writes in his book “10 Real-Life Lessons Every Entrepreneur Should Know About Building a Multimillion-Dollar Business” about the decade long processes his own business went through as it grew. He writes about the learning process, where he learned his business. He writes about the earning process, where the lessons he had learned from his mistakes started to pay off and he began to build a foundation of wealth. Then he talks about the giving back process. He says:

During this period of time, my focus shifted from making money to asking myself the question, “How can I serve more people?” Ironically, I have made more money focusing on serving more people rather than focusing on how to make more money.

The idea that service comes from success resonated with me and I’m meditating on what it means to serve people. Does service require consent or at least a desire to be served? Does service require a person to realize they’ve benefited?  Is what I’m doing benefiting and serving the most people?

In the meantime, pass my my fiddle. And my bike.